Music on the brain

Most western classical music is based on the heptatonic scale, ie the 7 note octave of “do-re-mi-fa so-la-ti-(do’) ”. But popular music, from nursery rhymes to Negro spirituals, is often based on a five note octave, or pentatonic scale. So are many forms of folk music, from Indonesian gamelan to Andean music. In fact, according to the Wikipedia article where I found this information, composers of film scores often use the pentatonic scale when they want the music to indicate “primitive or exotic contexts”.

In this 3 minute video (filmed at the World Science Festival several years ago), musician Bobby McFerrin has some fun demonstrating the apparently universal nature of the pentatonic scale. As he says at the end of the clip, no matter where in the world he goes, audiences ‘get’ it. It’s as though our brains are wired that way. Or perhaps we’re just all in tune with Bobby McFerrin. 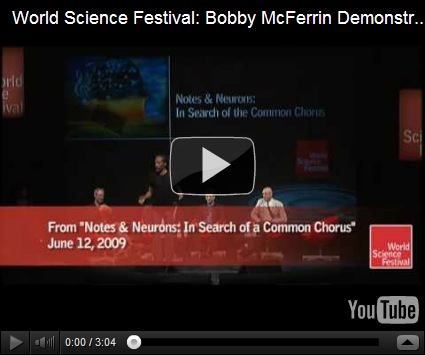 Posted by Stella Budrikis at 10:02 pm