The wistful pilgrimage of a modern man 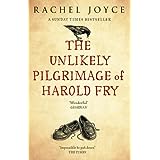 Harold Fry sets out, on foot, to post a letter to an old friend who is dying. His intention is to put the letter in the mail box just down the road from his home, in Devon on the south coast of England. But something happens that inspires Harold to keep walking. Several weeks later he and the letter arrive at their destination in Berwick, close to the Scottish border. He has walked the entire distance, and in the process he has acquired more than just a wild beard and a fine set of blisters.

The Unlikely Pilgrimage of Harold Fry by Rachel Joyce is a tender, lyrical book that begins with an almost comical premise. The walk itself and the people Harold encounters on the way are drawn with a light touch. Yet as we follow Harold’s progress through the English countryside, a darker back story is gradually revealed. Harold has to deal with his own doubts, fears and inner demons as well as his physical frailty.

This is a book about faith. Yet faith is something that is never really defined. Harold has faith that by walking to Berwick he will somehow save his friend. But how? His faith rests on something said by a girl in a service station. But why? The author seems to be asking the same questions. Ultimately Harold’s ‘faith’ is proven to be without foundation. Yet in his pilgrimage he develops another sort of faith, in himself, and in the people around him.

As in many modern novels, what is traditionally thought of as ‘faith’ is dismissed. Those who talk a lot about religion are shown to be hypocritical or mad. Those whose religious faith leads them to acts of compassion – nuns, for instance – are seen as having something which is unattainable by normal human beings. It’s good that they have it, but it’s not for the rest of us.

Yet there’s a certain wistfulness in the way this, and other novels, dismiss ‘religious’ faith. Faith involving trust in a good God is something which the characters seem to quietly yearn for, even though they feel that it’s not for them. Both Harold and Maureen, his wife, have moments where they ponder belief in a God, then decide it’s ‘too late’ to believe now. It becomes clear that it's not just their age, but their experiences that have made it too late.


I think there is a part in all of us that is looking for something bigger -- maybe it is the nature of being human that we seek to make sense of things that don't make sense at all. I also think that we all know what it means to lose people and things you want to keep. We know what remorse is and we also know how good it feels to connect. Essentially Harold sees himself as ordinary. I think that is true for most of us.

It’s this sort of insight that makes The Unlikely Pilgrimage both tantalising yet frustrating to a Christian reader. I wanted a character to come along who knew what that ‘something bigger’ really is, without being a religious jerk or a nun. I enjoyed the book, both for it’s wonderful prose and for it’s probing into the spiritual nature of ordinary human life. But I was left wondering, how can we express an alternative, attractive, accessible view of faith. How can we show the Harold's of this world that it's never too late?
Posted by Stella Budrikis at 12:50 pm