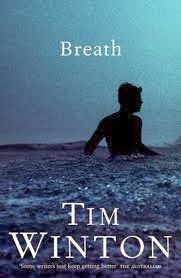 My first exposure to Tim Winton's novels came in the late 1990's. The holiday cottage where we were staying had a small collection of books, one of which was "The Riders". I began reading about ten o'clock in the morning and continued reading until I finished the book about two o'clock the next morning. I can't remember whether or not I cooked dinner for my family or even spoke to them during that day.

Since then I've read several of his books (though strangely I've never read Cloud Street which is the one which most people know). In all of his novels, places are described in a way that is sparing of words, yet highly evocative. In an interview Tim Winton once said "The place comes first", and no other novelist I know writes about places the way he does.

In Breath, published in 2008, ocean swells and rock formations off the southern coast not only have names, but become protagonists in the plot. The setting is a small timber-cutting town named Sawyer, it's neighbouring port town of Angelus, and the rugged coast in between, sometime in the 1970's. Anyone who has spent time on the south coast of Western Australia would have no difficulty in recognising these locations. For me, it was like revisiting the landscapes and social terrain of my teenage years. But Winton doesn't describe places so much as bring them to life as characters in his story. Angelus and Sawyer each have their own personality which plays a role in events.

Breath is, at one level, a coming-of-age story. Written in the first person, it describes Bruce Pike, "Pikelet", an only child, who manages to evade his parents' fears and restrictions as he learns to surf with his wild companion Loonie. In the process he encounters adults who introduce him to a very different world from that of his upbringing, and faces challenges and risks that he is not always prepared for.

Yet it's not just a coming-of-age story. We first meet Pike as an adult, when he is working as a paramedic. And while the events of his teenage years form the bulk of the plot, we get to follow Pike well beyond young adulthood, as the choices he makes in his teens play out in his later life. My only disappointment with the book was that these later years are condensed into just a few pages. It was as if Winton had barely outlined the plots of several novels to come. I hope so.

As the title suggests Breath is a story in which breathing - learning to control one's own body, and pushing it to its limits - is a key theme. It's also about the suffocating effects of small town life, family and relationships. In some way, every character struggles with breathing, literally or figuratively, at some point.

It's a story in which many of the characters seek to find meaning in life by pushing themselves to the point of losing life altogether. They are only one lungful of water, one gasp of air, away from death. Surfing plays a large part in the plot, and the techniques and landscapes and exhilaration of surfing are described in fascinating detail, yet never in a way that merely provides information to impress. It's not a macho adventure story. Macho adventurers seldom struggle with philosophy as this book does.

Winton's characters are, at one level, very ordinary people doing the things that ordinary people do, including getting into bed with  each other. At another level Winton manages to show that there are no ordinary, unremarkable people. The people we barely notice in the street all have complex and sometimes painful stories, which they are struggling to make sense of. If you want to read about nice or noble people, Breath is not for you. If you want a great read, one that opens your eyes to a world that isn't mainstream or neatly packaged, I recommend it.

Posted by Stella Budrikis at 10:18 am