One hundred years ago, on 8 November, 1913, the Adelaide Advertiser printed this snippet of news:

In Denver (Colorado) Police Court last month, Mrs. Dorothy Funke, a bride of four weeks, was summoned for wearing in the public streets a garment which the policeman on duty declared shocked the modesty of the force and scandalised the citizens in general, to wit a double-slit skirt. Mrs. Funke was in good humor, and ridiculed the idea that the police were good judges of fashions.

"You really advertise my apparel," she said, and, bowing to the magistrate smilingly, she continued, "One might say now that I am wearing court dress". "Why, certainly; take me any way you like, she said to the newspaper photographers. I have nothing to be ashamed of. I was demonstrating the ease of movement possible by the wearing of a slit skirt, and also its general attractiveness. Don't you see how free and comfortable that skirt is?"There was no denying the "freedom" of it. "And it is the same way on the other side," said she, turning and giving her left side a chance.  There really was no difference, and the photographers did justice to both.

"I've got five slit skirt dresses, and two more with the double slit," Mrs Funke added. "They constitute my trousseau. I was married to Frank Funke four weeks ago in Butte."A timid-looking man, who said he was Mrs. Funke's husband, appeared and offered to buy a ticket to Ellis, Kansas, and this proposition was submitted to the court."Well." said the magistrate, "I'll sentence you to thirty days in gaol, but will suspend the sentence when you leave Denver."

She accepted the latter alternative.

Unfortunately I haven't been able to find any photos of Mrs Funke and her skirt, despite the reported enthusiasm of the newspaper photographers.

At the time, the hobble skirt was popular, though it can hardly have been comfortable. 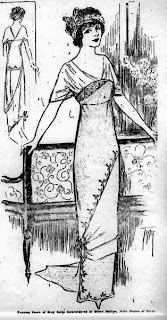 Perhaps the daring Mrs Funke was wearing something more like this (from A La Parisienne, Hiver 1913-1914)

A couple of weeks before the article in the Adelaide Advertiser, the Hobart Mercury reported that "the appearance of a couple of slashed skirts nearly caused a riot in George Street, Sydney." When two fashionably dressed women got out of taxi in Martin Place, such a crowd gathered to get a glimpse of their slit skirts that the constables had to be called.

Perhaps the Australian police were more broad minded than their American counterparts, as they simply escorted the two women to a waiting taxi and off they went.

Posted by Stella Budrikis at 11:25 am